Between October 2018 and March 2022, the interdisciplinary project EduArc is being undertaken as a joint endeavor between the University of Duisburg-Essen (UDE), The German Institute for International Educational Research (DIPF), the Leibniz Information Center for Economics (ZBW) and the Carl von Ossietzky University of Oldenburg (UOL). The German Ministry of Education and Research (BMBF) is funding the project from the funding line „Innovation potential of digital higher education“.

The project targets the development of a design concept for disseminated learning infrastructures, providing federated access to digital educational resources. Technical, didactic and organizational conditions of realizing an educational architecture will be researched, built upon a network of universities, and the interplay of state, public and private stakeholders. The project focuses on the challenges of disseminating open-license educational resources (OER) in an “informationally open eco system“, particularly regarding provision and access in repositories that are linked via metadata, e.g. handling of versions and respective quality mechanisms. This interdisciplinary project will align to state-specific, national, European and international developments.

The project is divided into eleven major work packages (WP): In the thematic area of resource and information management, the project first draws on case studies of (possible) user scenarios concerning the provision of teaching and learning resources in networked repositories (WP1, ZBW). A definition of metadata standards for networking the repositories will thus be necessary (WP2, ZBW) as well as an analysis and specification of interfaces for realizing the exchange of metadata (WP3, DIPF, ZBW). The project will also focus on the issue of versioning and consolidating exchange of information in a disseminated infrastructure (WP4, UDE). Based on a “Core Hub” (WP5, ZBW), the technical organization of implementing the system at a university is projected (WP6, ZBW). In the thematic area of university integration, Data Mining & Learning Analytics in disseminated learning infrastructures are in focus (WP7, DIPF), as well as the introduction of a repository for digital educational resources, (WP8, UDE), analysis of the use of educational resources in teaching (WP9, DIPF, UDE), and the quality assurance of open educational resources (WP10, UOL). An international comparison will elicit respective solutions from other countries, to assure alignment to international developments (WP11, UOL).

In order to ensure that the intended disseminated infrastructure is aligned with international developments and trends in the digital transformation of higher education systems, studies of other countries have been commissioned to display the international state of the art and gain insights for the development within the context of German higher education. COER members are involved in the study and are providing analyses of their higher education systems’ approach to the topic, and more specifically to the leading questions of the EduArc project.

The country studies focus on digital transformation across the macro, meso and micro levels (see Figure 1), and focus in particular on the infrastructure for disseminating OER in higher education, including repositories and meta-data standards. The studies also focus on national, state and institutional policies; quality assurance mechanisms and key actors; and how change (in terms of funding, managing and promoting infrastructure) is promoted and occurs at all three levels.

Victoria Marín presented 'Open Educational Resources in German Higher Education. An International Perspective' at the EDEN Research Workshop 2020 (Lisbon, Online) on Thursday, 22th October. The conference paper will be made available at the research project website in ResearchGate (see below).

Victoria Marín presented 'Macro Level Factors for the Development of OER Infrastructures in Higher Education: Main Insights of an International Comparison' at the OER Conference 2020 (online edition) on Thursday, 2nd April. The abstract and slides can be obtained here.

Melissa Bond presented 'Open educational resources in distributed learning infrastructures: An international comparative study' at the Strategies Beyond Borders conference in Berlin on Tuesday, 10th December. The abstract and slides can be obtained here. 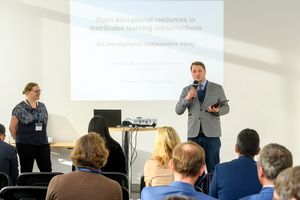 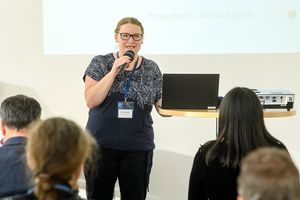