The involvement of the various status groups and especially the students has a long tradition at Carl von Ossietzky University. Thus, the participation and co-design of all university members and interested parties in the process of developing the climate protection concept is an essential component.

A core element of this participation is the Climate-neutral university working group.

"NOW by Jim Rakete is the film for the longed-for green turnaround! In his committed cinema debut, the famous cult photographer meets Generation Greta. Six young climate activists have their say, including Luisa Neubauer, Felix Finkbeiner and Nike Mahlhaus. Why did they become activists? What is at stake? The documentary, conceived by scriptwriter Claudia Rinke, encourages imitation. Quite deliberately - so that the youth of today also have a future tomorrow." - W-film

The students left the auditorium with intense impressions of the climate movement and activism.

To more information on the film 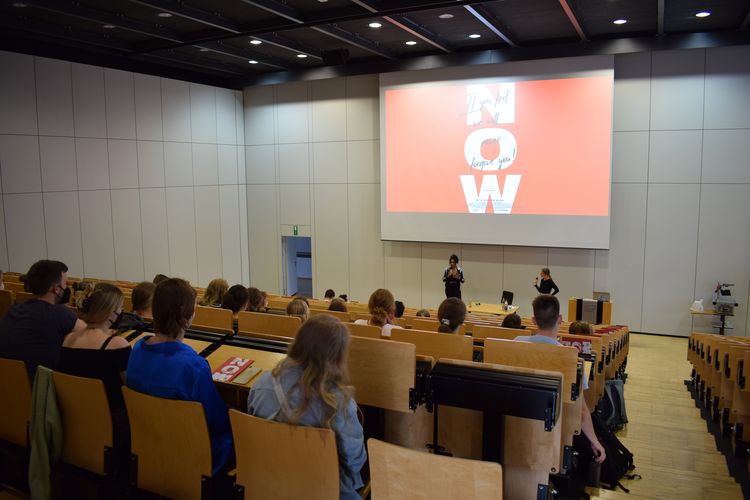 On February 24th, 2022, we were able to celebrate the achievement of the first milestone - the completion of the greenhouse gas balance.

At this event, we clarifed

After an introductory greeting by the President of the University Prof. Dr. Ralph Bruder, we presented the balance sheet. Afterwards, participants had the opportunity to ask questions and make suggestions.

In the second part of the event, participants had the opportunity to join a brainstorming session to collect your approaches and proposals for action. These will be contributed to the Action workshops in June 2022 and discussed further there. So you can really help to shape the concept!

To the presentation of the event

For more information on the progress of the project, we invite you to sign up for our newsletter. This can be done by sending an informal message to or via the form on this page.

On 4 November, the Climate Kickstarter took place with great success, at which the climate protection concept was presented to all university members and other interested parties.

Over 200 participants attended the event and enriched the presentation with their lively questions and suggestions.

After a greeting from the University President, Prof. Dr. Bruder, and a short input from Mr. Zenner, Head of the Climate Protection Department of the City of Oldenburg, the plan to create a climate protection concept for the University was presented. Afterwards, AStA spokesperson Jonas Maenicke highlighted the student perspective and involvement in the project.

To the presentation of the event

For more information on the progress of the project, we invite you to sign up for our newsletter. This can be done by sending an informal message to or via the form on this page.