About the University
EINBLICKE - Research magazine 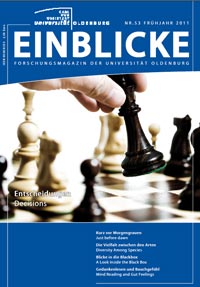 It is a reliable adviser. An important sender of signals. We are, of course, referring to our gut feeling. Without that to-and-fro between chest and pelvis we have a hard time making decisions. Research shows that when the emotional centre of the brain is damaged a patient has enormous problems reaching decisions – even if the rational part is still fully functional. “Decisions” are the subject of this issue of EINBLICKE magazine. What seems so obvious, so commonplace, is in reality highly complex, as the four articles by Oldenburg scientists reveal. The meaning of emotions is just one aspect that the neurobiologists Reto Weiler and Dorothe Poggel examine. They describe a neuroscientific toolkit that helps us to understand the decision-making process. The toolkit used by popular culture to dramatise decisions is made up of different components. “We know what‘s coming and yet we are still terrified” – this is the formula to which the Oldenburg specialist in American culture and languages Martin Butler reduces the narrative paradoxes of the horror film. Pop culture‘s dramatisation of decisions, Butler shows, is linked to fundamental ethical questions. In the EINBLICKE interview, social scientist Berhard Kittel describes how he analyses group decision-making in the laboratory. Mark Siebel looks at decision-making behaviour from a philosophical perspective. This is a conversation about experiment design, free will and the manipulation of decisions. The future of biodiversity research is the focus of marine biologist Helmut Hillebrand and science journalist Anja Fitter. They argue that this area of research should no longer be confined to recording populations. It must reorient itself and forge networks with other disciplines. So why did we decide on this theme for the issue? Because it is an area that Oldenburg scientists from a wide range of disciplines are researching. But in the end, it was down to gut feeling. We wish you a stimulating read!

Please give us your feedback on this current issue: einbq6daplicki6pgve@ugnv/olvt0.derrlf