Deep convection in the North Atlantic is a sensitive part of the thermohaline ocean circulation. Its intensity, location, and variability strongly influences the northward heat transport of the THC, the pathway of the North Atlantic Deep Water (NADW), and the total meridional overturning in models. Observational data display large interannual to decadal variability in the occurrence and depth of deep convection events. With simple conceptional models, we study the deep open ocean convection. Such a model consists of two boxes, one for the permanently mixed surface layer and one for the deep ocean. It includes different boundary conditions for the surface fluxes of heat and salt as well as a strongly nonlinear dependence of vertical mixing between the two boxes on the vertical density gradient. Under certain boundary conditions, this leads to a bistable regime of the water column, where convection can be either permanently "on" or permanently "off" depending on the initial conditions.

The goal of these investigations is to gain more insight into the convection process and the dependence of its stability on boundary conditions. Furthermore, we study the problems arising from parameterization of convection processes in comprehensive climate models.
This work has been done in collaboration with Stephan Rahmstorf and Till Kuhlbrodt from the Potsdam-Institue of Climate Impact Research and Sven Titz from the University of Potsdam. 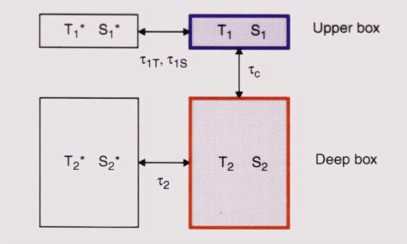