Our research focuses on the potential of colloidally prepared nanocrystals as well as organic materials for applications in environmental science. We are engaged in mainly two areas: The main topic of research are different types of solar cells, a second topic is the application potential of metallic nanocrystals in heterogeneous catalysis. On this page, a brief overview over our research activities in these fields is given.

Regarding the limited resources of fossil fuels as well as the necessity for protecting our environment, the conversion of solar radiation into electricity is an important alternative energy source. Solar cells based on conductive polymer are of particular interest, because this technology has a high potential for low cost devices which can be fabricated on flexible substrates. The heart of an organic “bulk heterojunction” solar cell is a blend of conductive polymer with a second material component, typically a fullerene derivate. Because of the different energy levels in both materials, such blends form a so-called donor/acceptor system. This means that subsequently to light absorption in the polymer (electron donor), charge transfer to the fullerene (electron acceptor) can occur – an important step in the conversion of light into electricity. After charge separation, the electrons and holes need to be transported along pathways through the donor and acceptor phase to the respective electrodes. Fig. 1 shows schematically the architecture of a typical organic bulk heterojunction solar cell. 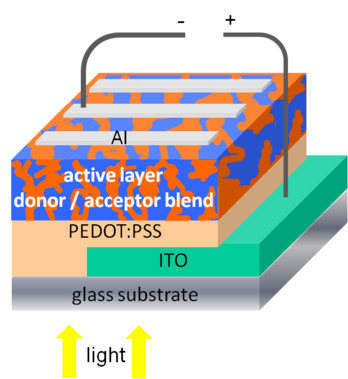 Small crystallites with a size of a few nm consist of only about ~1000 atoms. In this size range, many material properties can strongly differ from those of the bulk analogons. An impressive example is the so-called quantum size effect: The band gap of a semiconductor nanocrystal depends on the particle size. By consequence, controlling the particle size allows tuning the optical properties (e.g. absorption and fluorescence). A successful route to prepare semiconductor nanoparticles with well-defined size and shape is their synthesis by means of colloidal chemistry, where organic ligand molecules are used to stabilize the nanoparticles in colloidal solution. Fig. 2 shows a typical TEM image of monodisperse CdSe nanocrystals and Fig. 3 illustrates the quantum size effect for a series of CdSe nanoparticles of different size. The preparation of such semiconductor nanocrystals is done in cooperation with the Nanochemistry group. 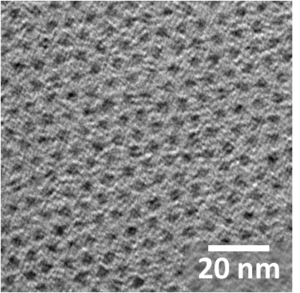 Fig. 4 - Schematic representation of the charge transfer process in hybrid composites of inorganic semiconductor nanoparticles and conductive polymer on the example of the CdSe/P3HT system.

The working principle of such hybrid solar cells was already demonstrated, but the reported efficiencies still do not exceed ~3-5%. Current aims in the field are to achieve deeper understanding and improvement of elementary steps such as the charge transfer and charge transport as well as the elaboration of more suitable materials and solar cell architectures. Our group is engaged in research on these issues.

Apart from hybrid polymer/nanoparticle devices, colloidal semiconductor nanocrystals are also interesting for the preparation of solar cells with purely inorganic layers that can be processed from solution. Corresponding solar cells are also studied in our group.

In heterogeneous gas phase catalysis, reactions of molecules in the gas phase are catalyzed by solids, in many cases by metals dispersed on a support material. The most widely-used conventional preparation method for supported metal catalysts is impregnation, where the support material is wetted with a solution containing a molecular metal precursor. Afterwards, the catalyst is dried and optionally calcinated and reduced, e.g., in H2 atmosphere, to convert adsorbed metal ions into the metallic species. However, such preparation techniques do usually not enable much structural control over the metal particles. Often it is even unclear, if metallic nanoparticles are formed on the support by these preparation techniques, or if simply metal atoms or ions are dispersed over the catalyst surface.

From these limitations of classical catalyst preparation methods arise the question, if colloidal chemistry routes, which enable unique possibilities for structure control by the use of stabilizing ligands in the synthesis, can be used to prepare more sophisticated catalysts. A strong benefit can be expected, because structural parameters such as particle size and shape as well as the composition in the case of bimetallic catalysts are known to be key factors governing activity and selectivity in many reactions.

Beyond advanced control of particle size and shape, the approach of colloidal chemistry introduces additionally the new possibility to prepare supported catalysts where the nanoparticle surface is partly covered by organic ligand molecules. This opens potentially new perspectives to influence on activity and selectivity due to electronic and sterical effects. However, there arises the fundamental question, if catalytic activity can be observed at all, if the surface of the nanoparticles is partly covered by organic ligands. With ligands present at the surface, it was shown in some studies that ligand-capped metal nanoparticles can be used for catalysis in colloidal solution which is also called quasi-homogeneous catalysis. However, in the field of heterogeneous catalysis, studies of colloidal nanoparticles without removal of the ligand shell are still rare.

In front of this background, we have in cooperation with external partners research activities to explore the application potential of ligand-capped metal nanoparticles for the use in heterogeneous gas phase catalysis. Fig. 5 shows as an example a TEM image of bimetallic Pt/Sn nanocrystals as well as IR spectra after exposure of ligand-capped Pt nanoparticles deposited on silicon dioxide to a CO gas stream. The appearance of a band at ~2040 cm-1 is indicative for CO adsorption on metallic Pt sites and provides evidence that small molecules like CO can penetrate the ligand shell, meaning that part of the surface is accesible for catalysis also in the presence of a ligand shell. Current research concentrates on various oxidation and hydrogenation reactions. 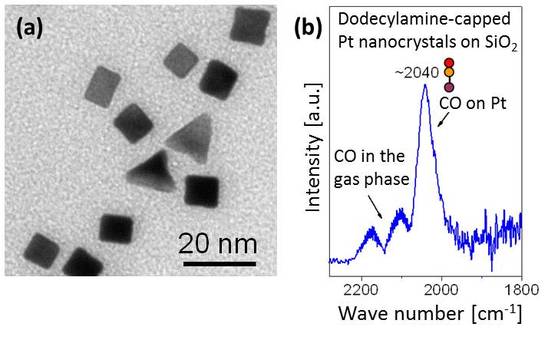 Fig. 5 - (a): TEM image of bimetallic Pt/Sn nanocrystals. (b): IR spectrum of dodecylamine (DDA)-capped Pt nanoparticles on SiO2 after exposure to approximately 2.5 vol% CO in N2 for a few minutes. The spectra were recorded after the CO supply was switched off, only residual gas phase CO is still visible.

Experimental Techniques used in the group