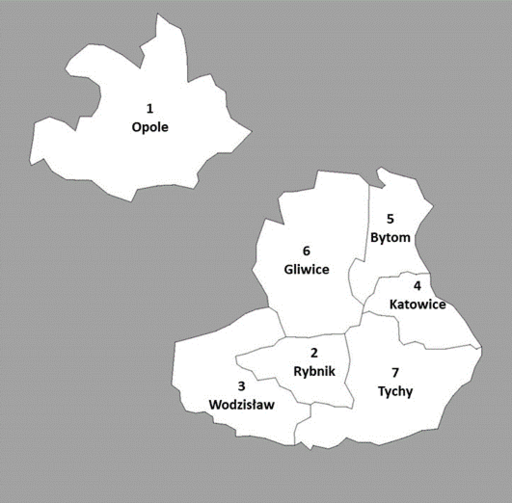 A schematic map of the regions in the data collected

The horizontal axis of the heatmap builds the cluster structure as well as the groupings of the seven
regions mentioned above with regard to the vitality of the tested Germanisms in the seven sub-regions, measured by subjective frequency of their use. The names of the regions are depicted below the colourful matrix. Above the matrix the result from the statistical cluster analysis can be seen in the form of a so-called dendrogram (as a tree-structure). A similar dendrogram can be seen left from the colourful matrix. This tree structure depicts the cluster analysis of the Germanisms tested. A black field can be seen right from the colourful matrix. This black field includes the labels of the Germanisms that were tested (and their Polish equivalents or paraphrases after the dash). In the standard, i.e., entire visualization these items cannot be seen given the high number of items tested.
The heatmap is interactive in the sense that any part of the matrix can be enlarged. If the mouse cursor
is moved while holding down the left mouse button, horizontal and vertical parts of the heatmap can be enlarged after the mouse button is released. It is optimal to mark smaller vertical distances, so that the labels will be readable on the right side. Each cell in the matrix represents a Germanism in a region. The entire matrix contains approx. 4.700 cells (678 Germanisms times the 7 regions). If the mouse cursor is moved from cell to cell, then the item that the cell represents appears in a grey field with the Silesian Germanism separated by a dash with the Polish translation (in rows), the sub-region (in column), and below the value of the subjective frequency (value), the latter representing the rounded median. If, for example, a Germanism has a value of 1, then it means that around 2.000 participants indicated strongly that they use this word almost all the time when speaking Silesian. Conversely, a value of 7 indicates that this Germanism is not known at all. A value of 6 indicates that the Germanism is known to a certain majority, it is nevertheless not in use. A value of 7 indicates that the word is even unknown, forgotten. The values from 2-5 represent gradual changes in the subjective frequency of use of the Germanisms as follows: the lower the value, the more frequent its use. The colour-scale renders graduality: deep red represents 1 („hot“), with deep blue representing 7 („ice-cold“).
It is interesting to scout deviant patterns in colour (according to personal interest) and enlarge these
areas  as  described  above.  The  heatmap  helps  with  the  orientation  in  the  table Subjective Frequency and Strength of Regional Variation which should appear at the end of 2020 via the BIS-publishing house of the University of Oldenburg as part of the Dictionary of Frequency of German Loanwords in Contemporary Silesian. (A link to that is going to be provided here.) The table was compiled by Gerd Hentschel and builds the basis for the heatmap, which was coded and compiled in the software R by István Fekete. Das Schlesische und seine Sprecher: Etablierung in der Gesellschaft, Attitüden, Germanismen [Silesian and its Speakers: Establishment in Society, Attitudes, Germanisms]
by Hentschel, Tambor, Fekete (in press), which is to appear at the beginning of 2021 with Peter Lang Publishing House, provides a thorough insight into the topic.