III. School of Linguistics and Cultural Studies
Institute for English and American Studies

This lecture series focuses on the notion of sites of encounter, which, in our broad understanding, include different kinds of social, geographical and medial environments that both are shaped by and give shape to the dynamics of cultural exchange. It features eight talks by Northern German American studies scholars on Tuesday evenings from 18.00-20.00 in S 2-206 (please be aware that there may be changes in the schedule). Click on the title to download the full programme.

The series of lectures draws on the conception of “contact zones” characterized by cross-cultural interaction, movement, and processes of appropriation. The notion of “liminal spaces” likewise denotes sites of cross-cultural movement, diversity, and transactions according to specific spatial, temporal, and social regimes. “Liminality” evokes social and epistemological flux and ambiguity as actual and symbolic boundaries and thresholds are traversed. Furthermore, the multilayered concept of “borderland(s)” can also help us conceive of sites of encounter as taking place in dynamically shifting topographies and along increasingly policed borders, engendering imaginary spaces of identity formation and cultural dis/continuity. At the same time, national borders have been increasingly reinforced by surveillance, control, and the use of violence. All of these developments and phenomena are inevitably affected by the medial representation within the discursive formation of meanings and knowledge, while the media at the very same time constitute complex sites of encounter in and by themselves; sites, which scholars of memory studies have reframed in terms of visual metaphors, figures/figurations, and topoi.

If you have any questions, please email: or . 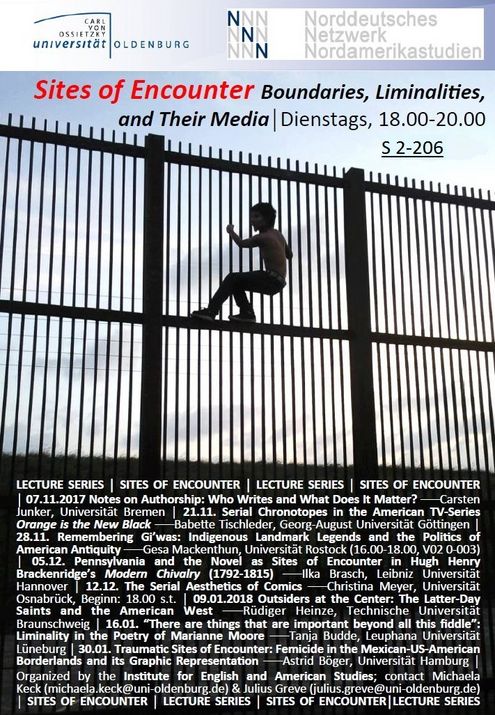