VI. School of Medicine and Health Sciences
Department of Psychology 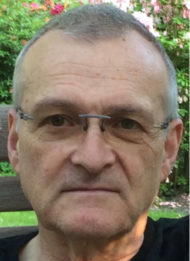 Hans Colonius studied psychology with a minor in mathematics at Göttingen University and at Technical  University  of  Braunschweig,  where  he  graduated  with  a  diploma  in  psychology  in  1973. Supported by Studienstiftung, he received his doctorate in Braunschweig with a dissertation on the "Role  of  the  Archimedean  and  related  axioms  in  fundamental  measurement''.  He  was  a  research fellow at the psychology department of New York University from  1978-­79 and obtained his  venia legendi  from  Braunschweig  University  in  1982  (thesis  on  "Stochastic  models  of  individual  choice behaviour''). After being awarded a Heisenberg professor fellowship from DFG in 1982, he became professor of experimental psychology and methods at Carl von Ossietzky University  Oldenburg in 1983. He was professor (visiting with tenure offer) at Purdue University (Indiana, USA) from 1988-­91. He has since been with the department of psychology at Oldenburg and has given extended lectures at various universities (incl. Montpellier, Graz, Padova, Trento, Madrid). His research has been funded by numerous grants from DFG, Volkswagenstiftung, Humboldt-Stiftung, DAAD, and NSF. He was principle  investigator  in  the  Center  of  Excellence  "Hearing-for-­All"  and two Collaborative Research Centers at Oldenburg University, and he is member of  the  Interdisciplinary  Research  Center  for  Neurosensory  Science (Oldenburg) and of the Munich Center of Advanced Study (CAS) Research Group on "Handling Visual Distration" (Hermann Müller, LMU).  He  is  editorial  board  member  of   "Journal  of  Mathematical  Psychology" (Editor-­in-­chief 1995-­‐2000), European representative for the Society for Mathematical Psychology, and adjunct faculty member at Purdue University. He reviews for Psychological Review, Current Biology, Experimental Brain Research, Journal of Neuroscience, and many other journals. He is a frequent reviewer for DFG, NSF (National Science Foundation), and various departments of psychology.