SESAME is an international research project that incorporates a variety of disciplines to explore and study the ecosystem changes of the Mediterranean and the Black Seas as well as their surrounding environments. The multidisciplinary nature of the project, supported by the European Commission, means that it will bring together scientists with expertise in marine biology, biodiversity, physical and chemical oceanography, and socio-economics, in order to better understand past and future ecosystem changes.

The study estimates the regional mass transport and mass distribution in the Mediterranean and Black Sea catchments. Main topics are the coupling of continental hydrology with oceanography in coastal oceans and the water balance closure at the straits. It is based on a combination of altimetry, oceanography, hydrology and GRACE gravity fields.
The Gravity Recovery and Climate Experiment (GRACE) mission provides measurements of the time-variable Earth gravity field. Combined with simultaneous and complementary observations and model results, it enables to globally and locally quantify interactions between atmosphere, hydrosphere and geosphere. On land, it provides the change in terrestrial water storage and allows in hydrography to estimate the evapotraspiration from the terrestrial water. On sea, combined with satellite radar altimetry observations it provides the change in ocean water mass.
Satellite radar altimetry observes the total sea level variability, including both steric variations, due to temperature and salinity changes, and non-steric mass variations. The mass related (i.e. eustatic) sea level change is evaluated from the steric-corrected measurements. The GRACE derived time-variable mass change will be regionally compared to estimates of non-steric sea level change from altimeter observations. Environmental corrections for altimetry and GRACE data will be assessed and homogenized for the comparison of gravimetric and altimetric signals.
An ocean general circulation model with a high spatial resolution and realistic forcing will be applied to the Mediterranean-Black Sea region and run both with and without assimilation of altimeter data. It wil simulate steric and salinity contributions, flow and water mass characteristics and aims at an improved understanding of the basic physical controls. Finally, we will quantify the importance of using GRACE and later GOCE data regionally in areas dominated by continental shelf and steep topography breaks.

The region selected for the project includes both an ocean area, the couple of lagoon type (Mediterranean Sea) and estuarine (Black Sea) basins, and a land area, their corresponding watersheds.

The basic dynamical feature in the Black Sea is a cyclonic rim current with numerous mesoscale eddies near to the coast The general circulation seasonal variations are mainly wind-driven. Most of the seasonal mass change is due to the river runoff. The annual amplitude of the thermo-steric heights in the Black Sea is 2 cm. The Black Sea basin is sensitive to climate variability and amplifies large scale climatic signals by integrating the variations of global forcing over a vast catchment area. Evaporation exceeds precipitation and the freshwater budget (E-P-R) assumes both positive and negative values because of the river runoff. Its watershed is 5 times the area of the Black Sea itself (24 x 105 km2). The annual discharge of its biggest rivers (Danube, Dniepr, Dniestr, Southern Bug, Don and Kuban) is of the same order of magnitude of the discharge in the Mediterranean Sea. The sea level is subject to great seasonal, inter-annual and decadal variability and is the most important parameter controlling the exchange with the Mediterranean Sea.

The steric sea level component is estimated from temperature and salinity data outputs from the ocean models (MFSTEP in the Mediterranean and local model in Black Sea from this task). The accuracy of the steric component is fundamental for mass change estimation from altimetry data and is checked by using different Temperature and Salinity model outputs and against local data.
Data outputs with sufficient resolution of basic physical processes are stored, prepared in a suitable form and made available to partners for further analysis. The approaches used to process data are coherent with the ones of ongoing activities in Europe (e.g. MERSEA, MFSTEP). 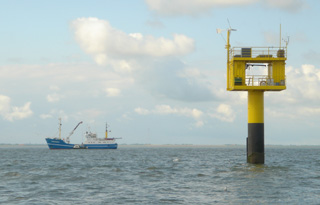 In order to understand the kind and extent of the exchange processes between the near-coastal zone and the open sea in a scientifically satisfactory way, models as well as in-situ measurements and remote sensing data with extremely high resolution are required. The spatial resolution in the model will be obtained by downscaling a large-scale North Sea model to the tidal flats with a grid size of 50 m.
Recent satellite techniques even allow a spatial resolution down to the 10-m level. We will increase the quality of the experimental time series through extended validation methods and improved long-term stability of the sensors. The complex transport, turbulence and sediment structures which we observed must be reproduced by numerical models as quality features. In this way, we will be able to give a reliable estimate of the dynamic off-shore processes and predict their effects. A fundamental understanding based on observations and modelling is the basis for a sustainable development of coastal zones. The overall aim of this subproject is to combine observation strategies and hydrodynamic models in order to achieve a validated representation of movement processes and material transport in the water column of the East Frisian tidal flats.