The binaural minimum-variance distortionless-response (BMVDR) beamformer is a well-known noise reduction algorithm that can be steered using the relative transfer function (RTF) vector of the desired speech source. Exploiting the availability of an external microphone that is spatially separated from the head-mounted microphones, an efficient method has been recently proposed to estimate the RTF vector in a diffuse noise field. When multiple external microphones are available, different RTF vector estimates can be obtained by using this method for each external microphone. In this paper, we propose several procedures to combine these RTF vector estimates, either by selecting the estimate corresponding to the highest input SNR, by averaging the estimates or by combining the estimates in order to maximize the output SNR of the BMVDR beamformer. Experimental results for a moving speaker and diffuse noise in a reverberant environment show that the output SNR-maximizing combination yields the largest binaural SNR improvement and also outperforms the state-of-the art covariance whitening method. 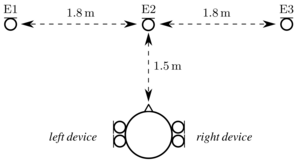