The heat radiation emitted by a nanoparticle depends strongly on its environment. As for the spontaneous emission of atoms, the heat radiated by a nanoparticle changes tremendously when placing it close to a cold surface. This effect is due to the near-field interaction between the nanoparticle and the surface. This near-field interaction is sensitive to the geometry of the particle (that is, whether its shape is rice corn-like or pancake-like) and to that of the surface (also including surface roughness). In addition, it turns out that many-particle effects (configurational resonances) affect the heat flux between nanoparticles. For instance, the radiative heat flow between two nanoparticles can be controlled (increased and decreased) by introducing a third nanoparticle, due to such configurational resonances. 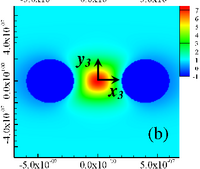