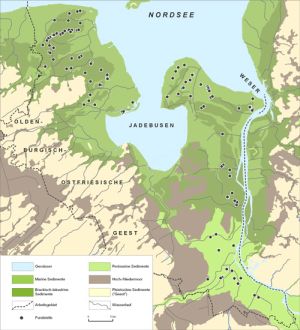 Shelf sea coasts such as the Jade Bay area are extremely dynamic environments that are both challenging and promising to humans. In the course of history the residents of the North Sea coast have developed different strategies to cope with environmental dangers and to take advantage of the landscape's potential. Information concerning the settlement development and cultural landscape history collected in the Jade Bay project will allow a diachronic approach to the potential and risks people faced in the coastal region. Within the project all available information from archives, literature, maps and other data sources will be collected. The area under investigation encloses the administrative districts and municipalities bordering the Jade Bay. Special attention is drawn to data sources and areas that have not been subject to scientific exploration so far. In specific cases data gaps are closed by systematic investigations including archaeological drillings and prospections. The map on this page shows settlement sites in the Jade Bay area from the end of the pre-Roman Iron Age and the Roman Iron Age. Many of these sites started on level ground (Flachsiedlungen) and were raised to dwelling mounds (Wurten) in the course of the early Roman Iron Age (1st to 2nd century AD) as a reaction to increasing storm surge levels.