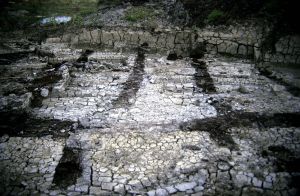 The constant demand for salt for preserving food and cooking in the North Sea Region brought about the invention of a highly specialised technique for the production of salt from peat. This process, called selnering, was based on the extraction of the salt crystals from frequently flooded peat layers. After drying and burning the peat, the ashes were mixed with sea water. The result was brine with high salinity, which was heated to produce salt. The extensive excavation, caused by this method, possibly since the roman iron age, led to the lowering of broad parts of the area, followed by major problems: In the case of a breaking dike, the water could stream unhindered into these lower areas and remained there sometimes for centuries. In the Middle Ages the salt production from the peats reached an industrial level, which affected wide parts of the bogs. This process is possibly responsible for the genesis of the Jade Bay. Two well known digging places in the Jade Bay area (Diekmannshausen; Oberahnsche Felder) show different digging techniques and illustrate the loss of land as a result of excavation. Within the Jade Bay Project, Annette Siegmüller and Friederike Bungenstock (Lower Saxony Institute for historical coastal research) have been researching these questions since 2008. The main question in this project is to what extent the peat digging for salt production played a role for the formation of the Jade Bay. In a first step the historical maps of the region have been analyzed to obtain more information about potential selnering areas. This is now followed by geophysical prospection, which up to now has provided very good results.