This project aims to quantify from three-dimensional modelling the impact of climate variability and extreme weather events upon the coastal circulation of Hervey Bay.

The bay is a large embayment situated of the central eastern coast of Australia. It is home to several endangered species including Dugongs, Humpback Whales and Leatherback turtles and it is being utilised extensively for aquaculture and impacted upon by fisheries, tourism and pollution from agricultural runoff and coastal industries. Due to high evaporation and low river runoff many Australian estuaries and large coastal embayments are characterised by inverse flows with salinity increasing towards the coast and river mouths.

Compared to the traditional concept of an estuary, the circulation within an inverse estuary is reversed with outward flow of high-salinity below an incoming flow of low-salinity water. This circulation pattern is driven by high evaporation and low river runoff. The inverse estuarine circulation transports locally produced Hervey Bay water away from the shallow coastal source regions and discharges this water into the open ocean. Since Australia's climate is one of the worlds driest and locally characterised by high year-to-year rainfall variability, extreme weather events and climatic trends are likely to significantly impact upon the coastal circulation.

We seek to investigate this impact of climate variability and extreme weather events upon the coastal circulation of Hervey Bay through the further development and application of a general ocean circulation model. The development of the model will be supported through field observations. Lagrangian and Eulerian modelling techniques and diagnostics will be implemented into the model to estimate flushing times and regional residence times. Sensitivity studies including the effect of waves and projected anthropogenic sea-level rise will illuminate the basic physical mechanisms and responses of the circulation and sedimentation processes in the bay. Of particular interest are (a) the production and flow of saline water away from its coastal source region towards the open ocean as a function of the evaporation and precipitation balance, and (b) extreme weather events such severe storms and cyclones that lead to dramatic discharges of freshwater.

Current drying trends observed in coastal and southeast Queensland are expected to impact upon the balance between evaporation and river-runoff. This in turn impacts upon the production of saline Hervey Bay Water and leads to changes in the estuarine circulation. Changes due to climatic variability on a larger scale have already been documented for the circulation of the eastern Australian coast and are most likely linked to marine ecosystem changes. In addition to seeking answers to the above questions, it is proposed to investigate how current regional climatic trends will alter the physics of the Bay in the future.

Hervey Bay is situated just outside the southern boundary of the Great Barrier Reef Marine Park off the coast of subtropical southeast Queensland, Australia. It is bowlshaped with an area of about 4000 km2 and a main opening facing northward. At this location, the continental shelf is about 90-100 km wide and the eastward boarder separating the bay from the open ocean is formed by Fraser Island, the world's largest sand island. 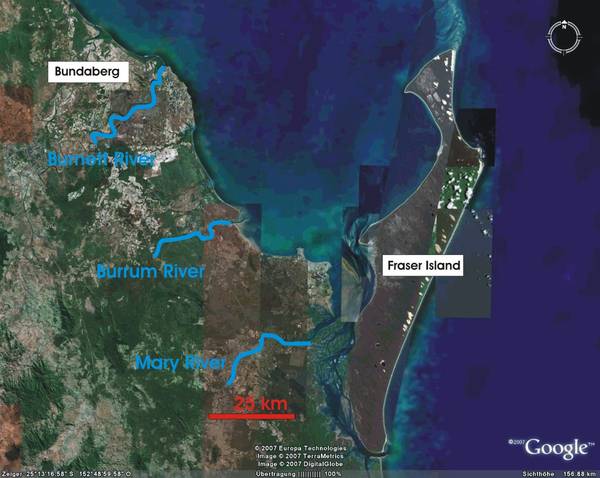 At its northern end, the bay is about 80 km wide and its average depth is about 20 m. In the south, it is connected with the open ocean via a narrow, about 90 km long and shallow system of channels, the Great Sandy Strait and an eastward facing gap of about 2 km width south of Fraser Island. The Mary, Burrum, and Burnett Rivers drain into the bay. The highly managed Mary and Burnett Rivers are the main sources for freshwater with the Burrum River having only a small catchment area. The Mary River mouth is located at the northern end of the Great Sandy Strait and freshwater is drained into the southern parts of Hervey Bay and southward into the Strait itself. The mouth of the Burnett River is found in the north of the study area.

The climate of the region is classed as subtropical with no distinct dry period. Rainfall is at a maximum from about January to April with an approximate climatological average of 150 mm per month for this period, yet rainfall and correlated runoff are characterised by high interannual variability and since about 1950, rainfall in coastal Queensland declined by about 50 mm per decade.

On this page are shown first results from temperature and salinity simulations. The numerical model we are using is COHERENS [COupled Hydrodynamical Ecological model for REgioNal Shelf seas]. Out of the dataset we have cut out a transect ( AB, seen at the upper part of the figure) to visualise the results. 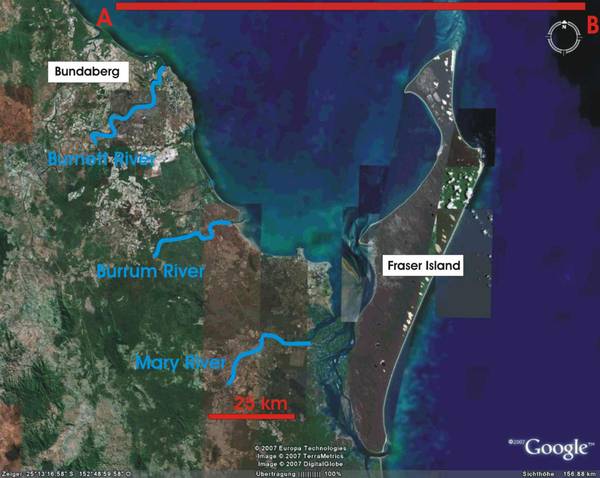 (Hervey Bay and the location of the transect)

Results of the temperature/salinity simulations for the year 2001. For visualisation purposes only the results up to a depth of 60m are shown.

Results of the temperature/salinity simulations for the year 2002. For visualisation purposes only the results up to a depth of 60m are shown.

Results of the temperature/salinity simulations for the year 2003. For visualisation purposes only the results up to a depth of 60m are shown.

In subtropical climates where evaporation is likely to exceed the supply of freshwater from precipitation and river run-off, large coastal bays, estuaries and near shore coastal environments are often characterised by inverse circulations and hypersalinity zones. An inverse circulation is characterised by sub-surface flow of saline water away from a zone of hypersalinity towards the open ocean. This flow takes place beneath a layer of inflowing oceanic water and leads to salt injections into the ocean.

In the movie below we show some model results to "proof" that Hervey Bay is such an inverse bay. One can see that during summer (the australian one), near the coast a hypersalinity zone forms. During winter the salinity gradient is weakend due to higher precipitation/less evaporiaton. Also shown in the movie is a flood event. Here the Mary River (at the southern end of Hervey Bay) flushes a significant amount of freshwater into the bay. Therefore the inverse state of Hervey Bay flips over to a regular one (the salinity near the coast is lower than in the open ocean). With the approach of winter, the evaporation starts to reduce the freshwater content of the bay and again the inverse state is established.