Behind the name hydrothermal carbonization is a process that makes it possible to produce coal from biomass. Under the influence of temperatures around 200 °C and a pressure of about 20 bar, the intermediate products humus, peat and lignite are produced in the course of an exothermic reaction. What takes millions of years in nature takes just a few hours in this process - and it's a CO2-neutral process.
About 100 years ago, Nobel Prize winner Friedrich Bergius already carried out the first hydrothermal experiments. During the era of cheap oil in the decades after World War II, the process became less important. Nevertheless, some research happened in relevant subfields. In times when efficient use of resources and climate protection are becoming more and more important, HTC has been rediscovered. Since a publication by Antonietti in 2006, the process has been studied in a more focused way. It became clear that practically any form of biomass can be utilized with HTC. This makes the process particularly interesting for unused or insufficiently used biomass: biogenic residual and waste materials. In addition to waste from organic waste garbage cans and autumn leaves, for example, sewage sludge and fermentation residues from biogas plants can also be utilized. 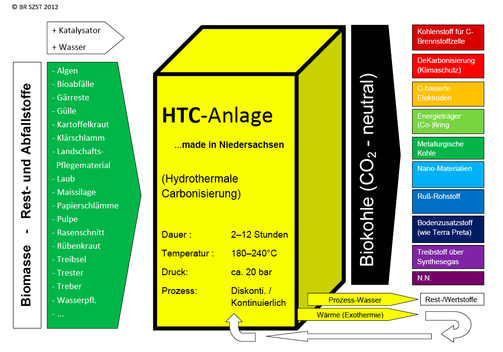 After a hydrothermal reaction, the resulting biochar is free of pathogens and enriched in carbon compared to the starting material. This opens up numerous possibilities for the material use of biochar, including as insulation materials, road surfacing additives, industrial carbon black or activated carbon. Of particular interest is the possibility of incorporating the biochar into soils, thus enhancing the properties of the soil and at the same time storing the carbon stored in the charcoal in bound form in soils over the long term.