Modern offshore wind turbines are expected to make a significant contribution to the success of the energy transition. Future turbines will be significantly larger than today's: over 300 metres in total height and with rotors more than 280 metres in diameter. This will result in hitherto unknown impacts, environmental influences and interactions of individual components. Today's established methods for designing and operating wind turbines are no longer applicable to structures of this size. Therefore, new concepts are being developed in the Collaborative Research Centre (SFB) 1463 "Integrated Design and Operation Methodology for Offshore Megastructures" at Leibniz Universität Hannover.

The aim of the Collaborative Research Centre is to research physical and methodological principles based on the concept of a digital twin. The digital twin is an individual simulation model for the development of integrated design and operational planning.

For modern offshore wind turbines, the design goals are evolving away from minimised costs at wind farm level and towards optimisation of performance and costs at the power system level. A power characteristic with relatively more power in low wind and less feed-in in high wind would be desirable for this, but contradicts principles that have been tested so far. Thus, the scientific challenges arise to research aerodynamic design methods and control engineering operating strategies that effectively limit the loads on extremely large rotor blades of up to 200 m in length at medium and high wind speeds and under extreme conditions.

Due to the operation in different operating modes, the outer area of the rotor has a more "permeable" effect at higher wind speeds and is strongly relieved. In terms of fluid mechanics, this corresponds to a variable, radially strongly varying induction distribution along the rotor blades.

Methodologically, the scaling of the problems to the size of the Oldenburg wind tunnel with its reproducible turbulent inflow conditions is of central importance. Experiments with a model wind turbine are to be carried out with two objectives: Research into the effects of radially variable induction on rotor aerodynamics and research and validation of new model predictive approaches in operational management. The experimental setup from a previous measurement campaign in the wind tunnel at Carl von Ossietzky University can be seen in Figure 1. 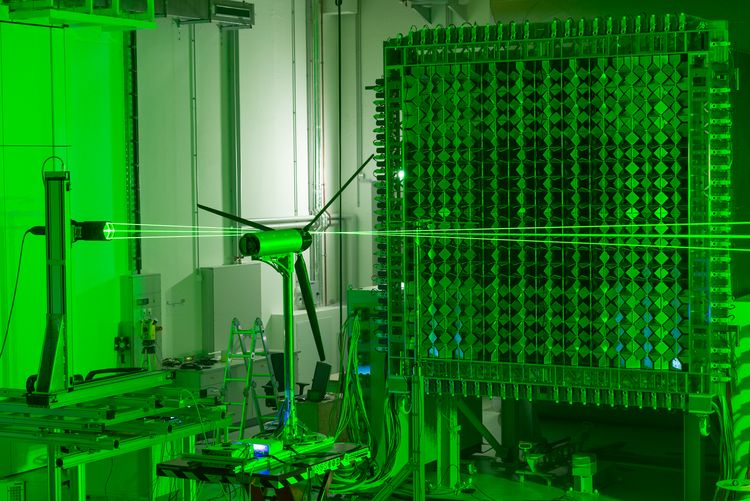 Fig.1: Wind tunnel model of a wind turbine (MoWiTO 1.8) in the wind tunnel of Oldenburg University with laser Doppler anemometer and active grid.