Excitonic Circular Dichroism (ECD) is an optical property in organic matter arising from the strucutral phenomenon of mirror-symmetry breaking in homochiral supramolecular aggregates. In thin films, it can by probed best by Mueller Matrix Ellipsometry. ECD is not necessarily a tiny quantity in organic matter, in some cases it can be giant.

Organic photodetectors based on homochiral materials are intriniscally sensitive to the circular polarization state of light without the need for polarization manipulating elements. They allow for polarization based information encoding in optical communication technologies.

The interface of the organic photosenosor to the physiological environment is decisive for the stimulation process. Therefore, it is especially examined by in operando spectroscopic ellipsometry combined with electrochemical analysis.

Just recently Marvin started his PhD and already won the Poster Prize at the 11th Workshop on Spectroscopic Ellipsometry in Steyr, Austria. 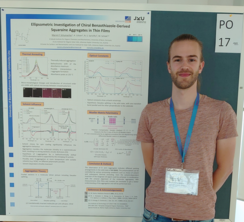 Funding was granted by the Linz Institute of Technology at the Johannes Kepler University.

Understanding and subsequent optimization of Bio-Opto-Electronic Interfaces to a Physiological Electrolyte by in operando Ellipsometric Spectro-Electrochemistry is the scope of the project.

Congratulations to your successful defense of PhD thesis!

some poster reprints are available on ResearchGate