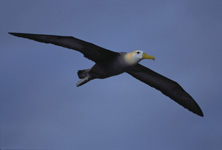 The long-distance navigational abilities of animals have fascinated humans for centuries and challenged scientists for decades. How is a butterfly with a brain weighing less than 0.02 grams able to find its way to a very specific wintering site thousands of kilometers away, even though it has never been there before? And, how does a migratory bird circumnavigate the globe with a precision unobtainable by human navigators before the emergence of GPS satellites?

To answer these questions, multi-disciplinary approaches are needed. Our group and its collaborators use mathematical modelling, physics, quantum chemistry, molecular biology, neurobiology, histology, computer simulations and newly developed laboratory equipment in combination with behavioral experiments and analyses of field data to achieve a better understanding of the behavioral and physiological mechanisms of long distance navigation in insects and birds (Nature 558, 50-59). In recent years, our main focus has been on unravelling the mechanisms underlying the magnetic senses in birds:

Migratory birds can use a magnetic compass to find their way (for a review, see Nature 558, 50-59), and, at least in North America, they seem to calibrate this magnetic compass after the sun compass each evening (Science 304, 405-408); but how do they sense the reference direction provided by the geomagnetic field?

In recent years, two biophysical mechanisms have become established as the most promising magnetodetection candidates: (1) iron-mineral-based sensors in the upper beak connecting to the brain through the ophthalmic branch of the trigeminal nerve and/or (2) light-dependent radical-pair processes in the eyes converting the magnetic signal into a visual signal, which is then processed in visual brain areas (for a review, see Annual Review of Biophysics 45, 299–344). In the past years, we performed a number of combined experiments involving molecular biology, biochemistry, anatomy, chemical analyses, neurobiology and behaviour which has brought us to the conclusion that birds do not only have one, but two different magnetic senses, and both the original hypotheses seems to be generally correct.

We have shown that bird retinas host molecules called cryptochromes (Current Biology 28, 211–223). We have shown that Cryptochrome 4 is magnetically sensitive and possess a number of key biophysical prerequisites that makes it ideally suited as magnetodetectors (Nature 2021, in press). We have also located a specific forebrain area, named Cluster N, which is the only part of a migratory bird’s forebrain being highly active processing sensory information when birds perform magnetic compass orientation. Furthermore, if Cluster N is deactivated, migratory European Robins can no longer use their magnetic compass, whereas their star compass and sun compass abilities are unaffected (Nature 461, 1274-1277). Bilateral section of the trigeminal nerve had no effect on the birds’ ability to use their magnetic compass (Nature 461, 1274-1277), but does that mean that the iron mineral based putative sensors in the upper beak are not magnetodetectors? Our most recent findings have documented that the ophthalmic branch of the trigeminal nerve does indeed also transmit magnetic information to the brain (PNAS 107, 9394-9399).

If night-migratory songbirds use a radical-pair mechanism for their magnetic compass, they should be sensitive to anthropogenic radiofrequency electromagnetic noise. This is the case (Nature 509, 353-356). Furthermore, if we can prove that cryptochrome 4 is a radical-pair-based magnetic sensor in migratory birds, we will also have demonstrated a fundamentally quantum mechanism that makes animals sensitive to environmental stimuli a million times weaker than previously thought possible (Annual Review of Biophysics 45, 299–344).

To understand the fundamental quantum mechanism in the birds eye, Apl. Prof. Karin Dedek as retina and vision specialist is doing research within my group on the following topics: Retinal circuitry for magnetoreception in migratory birds and further more general vision topics: functional role of horizontal cells in the retina, retina degeneration and gap junctions.