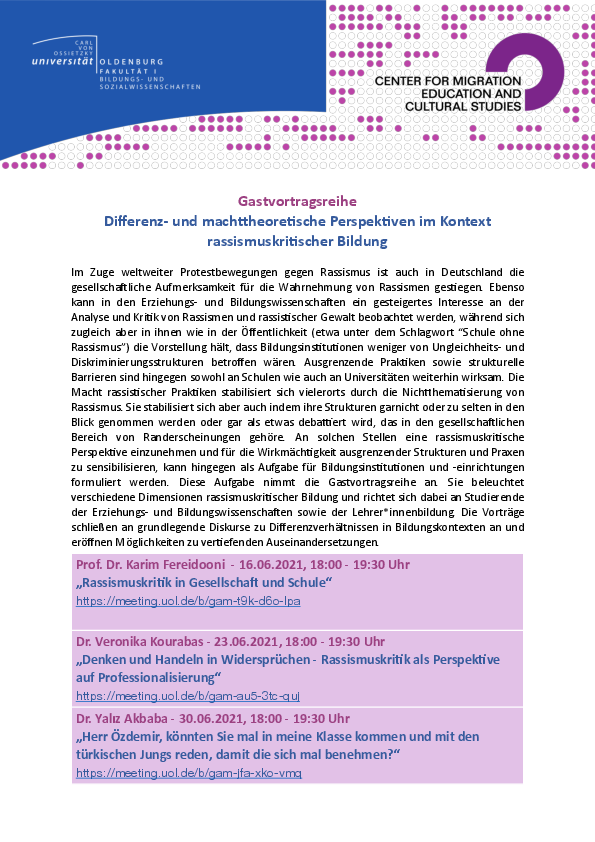 „Untangling the Relationship between Internalized Heterosexism and Psychological Intimate Partner Violance Perpetration. A comparative study of Lesbian and Bisexual Woman in Turkey and Denmark”

Researchers from all over the world experience repressions. Not only are they prevented from conducting free research, often their lives and the lives of their families are endangered. Minorities find it difficult to assert themselves in the academic world. A different way of thinking or criticism of their own country can lead to institutional, life-threatening repression.

What forms can such threats take? And how does the academic world deal with it? On the one hand, attempts are being made to maintain cooperation in research and teaching in countries with authoritarian, repressive and totalitarian regimes. On the other hand, universities and institutions are involved in supporting researchers who are persecuted and threatened by persecution. Isn't that a contradiction? This speaker series is intended to stimulate thought, provide insights into the academic reality of researchers and initiate rethinking.

This Kick-Off event of the Speaker Series: Politics of Repression - Strategies and Resistances in Scholarship offers an insight into the work of the `Scholars at Risk´-network, their motivations, support structures and history.

11.05.2021, 4-6 pm: University of Oldenburg: Untangling the Relationship between Internalized Heterosexism and Psychological Intimate Partner Violence Perpetration: A comparative study of Lesbian and Bisexual Women in Turkey and Denmark

Psychological intimate partner violence (IPV) perpetration is not limited to heterosexual relationships and can affect all genders and sexual orientations, including lesbians and bisexual women (LB) both in Denmark and Turkey.

Over the past years we have been witnessing increased repression towards academics and scientific research in various countries. Scholars are attacked for their critical research and teachings, and for voicing it in public. They are dismissed, imprisoned, their institutions shut down or research impeded. These forms of repression are part of an ongoing crisis, which once again highlight the centrality of academic autonomy for democracy. They, however, also compel us to revisit the relation between academia and a democratic public in the light of its current erosion by authoritarian governments. Drawing on the findings of their recent study on academic freedom in Turkish universities, İnan Özdemir Taştan and Aydın Ördek from the School of Human Rights, Ankara/Turkey, will discuss the extent of the repression and its implications. Asking how we can grasp academic freedom in terms of rights and responsibilities for the future of democracy, they will explore lessons that can be learnt from the Turkish case contributing to a broader diagnosis of the situation of academia beyond this specific crisis.

This event is jointly organized by the International Office, the Department of Anthropology and Cultural Research, the Research Group Soft Authoritarianisms, and Worlds of Contradiction, all University of Bremen.

This talk examines the brief but remarkable presence of leftist Brazilian lesbian politician Marielle Franco, who was assassinated on March 14, 2018 in a still unresolved case.

What can we, as scholars, learn from the study of Marielle Franco’s political (after)life? The talk will address her parliamentary strategies from a queer/lesbofeminist perspective fighting against institutional/life-threatening repression as a minority force and the inherent issues that her presence brought to light. Along with this, we will also address the persistent continuation of her struggle through many diverse demonstrations of supporters and institutions after her death. By theorizing the stakes, successes and the limits of her presence/absence in Brazil during a conservative (necro)political and neoliberal turn, the talk will also shed light on precarious forms of life and the challenges to make space for them in academic environments.

Followed by a discussion with

Cooperation in international higher education and research is an aspect of the foreign education and cultural policy of the Federal Republic of Germany. Research diplomacy as a guiding concept describes the attempt to keep dialogue possible through cooperation in teaching and research even where other diplomatic channels threaten to close, as in reseach cooperation with authoritarian, repressive and totalitarian regimes.

At the same time, German universities and research funding institutions are strongly committed to supporting academics persecuted or threatened with persecution - precisely those who become victims of repressive regimes through their commitment to the freedom of teaching and research. The tensions thus outlined emerge in ruptures and polyphonies in foreign policy, research funding and international university cooperation.

Such ruptures and polyphonies will be the topic of a panel discussion concluding the SAR Speaker Series „Politics of Repression“. Representatives from the Federal Foreign Office, the German Rectors' Conference, the German Academic Exchange Service (DAAD), the Alexander von Humboldt Foundation, and the University of Göttingen will come together to exchange views, contrast institutional perspectives onthe topic and weigh up strategic guidelines and practical options for action.