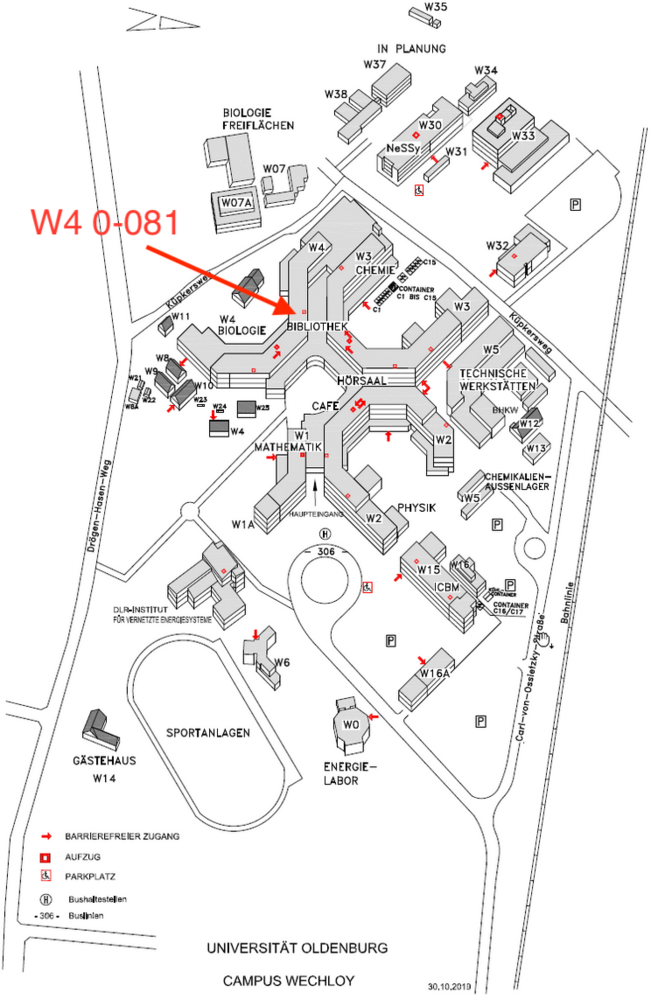 Welcome to the fluorescence microscopy service unit at the University of Oldenburg.

We facilitate an access to the to state-of-the-art microscopy equipment, training and assistance required for the broad range of light microscopy for imaging specimens ranging from single molecules to cells and tissue. The center also provide access to image analysis software and we support users in image data analysis and microscopy education.

PhD students, postdoctoral researcher, scientific staff and external academic and industry affiliated users may access our microscopes after a training by the center superusers.

The center operation and maintenance is shared between V. School of Mathematics and Science and VI. School of Medicine and Health Sciences. The regulations of the core facility were adopted by the University presidium in Octobre 2018. Regulations (in German).

For electron microscopy please visit the electron and light microscopy service unit of the School of Mathematics and Sciences.

Since mid 2012, under the umbrella of the Research Centre Neurosensory Science, a so-called STED light microscope has been put into operation. This was the first commercially available light microscope in Europe with a resolution capacity of below 50 nanometers (for comparison: a human hair is about 70,000 nm thick). This is primarily available to the working groups of the neurobiologists Prof. Dr. Reto Weiler and Prof. Dr. Henrik Mouritsen as well as to the scientists of the Research Training Group "Molecular Basis of Sensory Biology".

The costs for the acquisition of the unique light microscope for the Oldenburg neuroscientists were taken over by the large-scale equipment program of the German Research communities (DFG).

With the extremely high resolution of the microscope, all the finest cellular details can be revealed in living cells. This is made possible by the STED technology, which goes back to the Göttingen physicist Prof. Dr. Stefan Hell. In October 2014, Stefan Hell, together with Eric Betzig and William E. Moerner received the Nobel Prize in Chemistry for the development of super-dissolving fluorescence microscopy, which makes living structures visible in the nano-range and in the future important for the medical research. It transcends the resolution limit, which generally sets the wavelength of light optical instruments by using the principle of fluorescence. The latest generation of light microscopy thus significantly improves the precision and contrasts that were previously possible.

The first STED microscopes came to the market 2007. They make the finest details of the processes visible in living cells and thus allow new invisibility into the molecular causes of diseases and the effect of medications. The Max-Planck-Institute and the university medicine Göttingen as well as the Oldenburger neuroscientists work on this. In Oldenburg, the STED is used, among other things, to investigate cell differentiation in so-called support cells of the brain (glial) in neurodegenerative diseases (such as Alzheimer's) and to elucidate the communication of cells in the process.

Gated-STED Nanoscopy offers an extremely good spatial resolution and can scan at high speed in the nano-region. The new technology significantly improves the resolution and contrasts achieved so far with the CW-STED (Continuous-wave Stimulated emission Depletion) microscopy, whereby the laser intensity is much lower. This increases the photo stability as well as the cell ability and thus significantly expands the application spectrum.