Traditionally, brain electrical activity is recorded from upper head scalp sites, whereas locations behind the ear are ignored, or used as reference sites only. One goal of the cluster of excellence Hearing4All is to develop brain-computer interface technology for hearing aid control. Obviously, this ambitious goal requires unobtrusive, motion-tolerant, comfortable and discreet EEG acquisition in the first place. We first evaluated information that can be obtained from miniature electrodes placed in the outer-ear canal and the concha (Bleichner et al., 2015). From this study we learned that the distance between electrodes is important; a larger inter-electrode distance allows us to capture signals from further away. Furthermore the ability to derive bipolar channels of several different orientations (see also Bleichner et al., 2016), in order to "sense" into different directions, was found to be a necessary feature. This reasoning naturally leads to a C-shaped multi-sensor array that is placed around the ear. To implement this we teamed up with the company TMSI, who have been tremendously helpful in turning our idea into a real product. 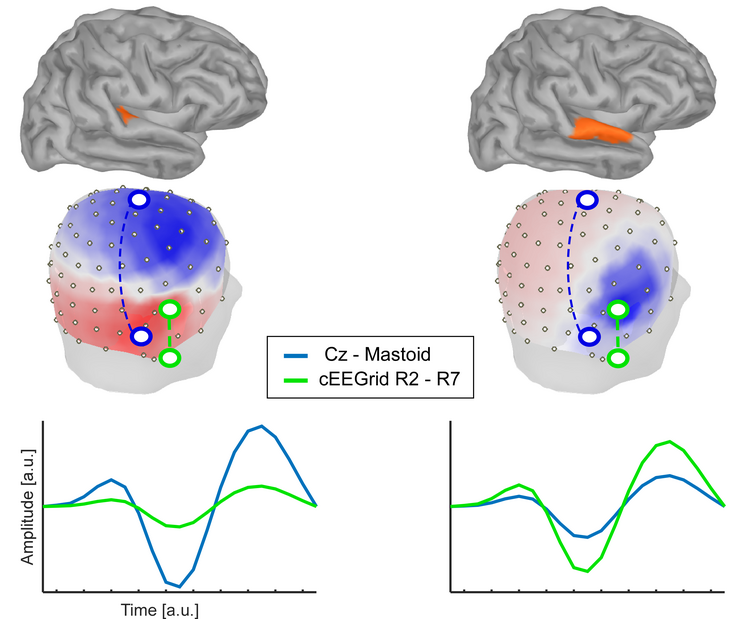 In a toy example illustrated here, we placed a single source into one of two locations, either the Heschl gyrus (left) or the superior temporal gyrus (right). The figure shows the voltage topography that would be measured with high-density EEG if only those sources were active. For illustration purposes we compare two bipolar channels, one derived from the cap-EEG data (blue) and one derived from cEEGrid EEG data (green). As can be seen in one condition the signal measured is larger for the cEEGrid channel, whereas in the other condition it is larger for the cap-EEG channel. Whether a brain source is "seen" from an EEG channel or not depends (among a couple of other reasons happily ignored here) to a large extent on whether the orientation of the EEG channel is aligned to the orientation of the dipolar source activity. In fact, a bipolar channel placed directly on top of a dipolar tangential source and oriented orthogonally to it may not capture any of the sources activity. Distance between electrodes, however, matters. Bipolar channels derived from two electrodes located very close to each other cannot "sense" very far, since the (far field) common voltage signals will be subtracted out.

Resting EEG
In Debener et al., (2015) we show that the famous Berger effect, a difference in 8-13 Hz (alpha) activity between eyes open and eyes closed resting conditions, can be easily confirmed with cEEGrid recordings. A good part of the resting EEG alpha activity originates in from occipital cortex, and is one feature captured by the cEEGrids.

Epilepsy EEG
In a very first pilot pediatric EEG study we confirmed the presence of interictal activity in cEEGrid EEG recordings, very similar to the concurrently recorded cap-EEG signals. Since key features of the cEEGrid technology are stable impedances for many hours and high wearing comfort, we believe the technology has great potential for improving current practice in pediatric epilepsy EEG acquisition. Validation studies are needed to identify the sensitivity and specificity of cEEGrid EEG signals for picking-up clinically relevant information.

Electrocardiogram
In many individuals, cEEGrid EEG data are contaminated by cardiac electrical activity (EKG). We use independent component analysis to disentangle EKG from brain electrical activity (EEG). This approach can be used to attenuate artifacts in multi-channel EEG recordings and also to improve the signal to noise ratio of the EKG. The ICA-derived cEEGrid EKG thus enables the analysis of heart-rate variability measures.